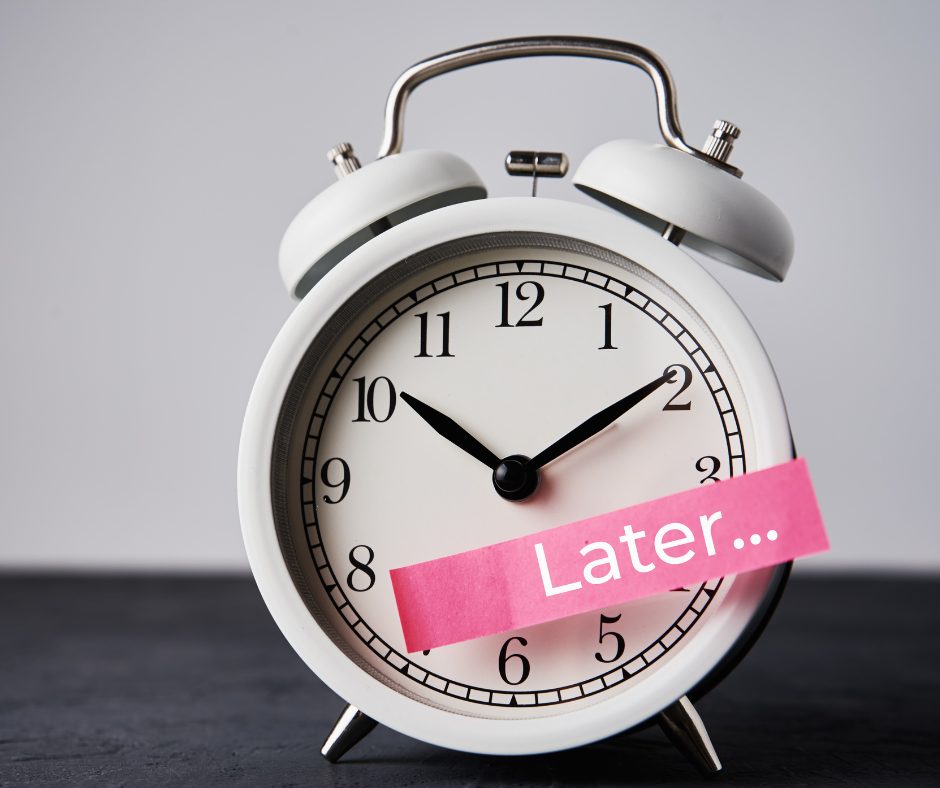 I’ll do it later…

Procrastination is when a task is delayed until the last minute, or for longer than reasonable. The purpose behind procrastination differs from person to person. It depends on the situation, but it is important to distinguish between procrastination and laziness or the unwillingness to do a task. In psychology research, procrastination is often described as a self-handicapping behaviour used to escape from the responsibility of failure and to protect from feeling a lack of ability.

This is an important topic, as an estimated 15-20% of the adult population describes procrastination as an issue in their lives. About 70% of students procrastinate at some point throughout their education, and 70-90% of those students report that their procrastination has negative consequences.

Why Is It Only Some Things?

Why is it that chores like vacuuming and washing dishes can be so hard to get started on, but other tasks such as redecorating your bedroom or reading a good book seem so doable? Your brain may be telling you that these more exciting tasks are a priority, pushing you to complete these rather than the less attractive, more monotonous everyday tasks. This is sometimes called productive procrastination, as we have the feeling that we are being productive, but the more important responsibilities are still being put off.

You also may notice that procrastination is not all bad – especially in the short term. By putting off writing that paper, for example, you’ll give yourself more time for fun and relaxation in the present. However, you’ll likely find that these short-term rewards are fleeting. When that deadline rolls around or you find yourself drowning in a pile of chores, you will likely find yourself stressed enough to negate all the relaxation you did before. This means that in the long term, procrastination is not the answer. It causes feelings of overwhelm, disorganization, and a lack of self-worth. Additionally, do we ever really relax when we know there are things we should be doing? True relaxation typically does not come when we are pushing something off, meaning that even the short-term rewards of procrastination are not truly valuable.

Despite the negative long-term effects, it is easy to get caught in a procrastination cycle. Studies show that when we put off a task that evaluates performance, we may be using a self-protecting mechanism. With limited time, a bad result can be blamed on external factors. We are then effectively preventing ourselves from being the only factor to blame if we do not perform at an expected level. For example, you convince yourself you are too busy to work on a big paper until the final couple of days. You submit it and think “it’s pretty good, considering the time limitations!” You then get your mark back and it may be average, but it is not because of your lack of ability, it is because of time constraints. You are then protected by this mentality, so you are likely to use this method again next time. Procrastination then becomes a part of your usual routine.

This is just one example of how procrastination cycles can be maintained. Among many other reasons, procrastination may also occur if the task seems too big or too difficult, if we do not understand the expectations well enough, if there are more attractive tasks to be completed, or if we are unsure of the outcome.

However, each of these issues can be resolved with some problem-solving. Big or difficult tasks can be broken down, we can reach out for clarification on expectations, important tasks can be prioritized, and we can learn to tolerate uncertainty. Creating to-do lists is essential. Using this tool, we can critically examine the tasks that need done. From there, we can rate the priority level of each task so that the focus is on the most important ones. We can also break down the bigger tasks into steps and schedule in time to complete them.  A CBT therapist can help with learning these skills and applying them to your daily life.

There is a myth that procrastinating is just laziness. Procrastination is complex!  People who procrastinate tend to want to do the task, and most even want to excel in it, but there are mental barriers preventing them from getting started. Laziness tends to come from actually not wanting to do the task at hand. One easy way to see the difference is to look at how you spend your time. If you are choosing to complete other tasks or spending time overly preparing yourself for the task, this is procrastination. If you are simply doing nothing rather than starting the task, it may be a sign of laziness.

Procrastination often comes from ideas of perfectionism rather than a desire to do nothing. In this case, the negative emotions associated with the need for perfection may be too much to cope with. You might then seek reassurance from those around you, put in a lot of research before getting started, or check and recheck the work you do before you submit it. This results in a delay in actually getting to the task.

When Is It a Problem?

Procrastination becomes a problem when it begins to interfere with your daily living or self-image. We may see the negative effects of procrastination in unbalanced home management, falling behind at work or school, or persistent negative emotions. It can also show in the form of negative self-talk, feelings of guilt, or low self-worth. If you recognize any recurring problems with procrastination that affect you more than you think is healthy, it may be time to see a CBT therapist. Ultimately, some problem-solving will be needed to get to the root of why you procrastinate the task. Working with a CBT therapist on this can help you learn helpful techniques such as reprioritizing, checking in with your motivation, and breaking down the task into manageable goals. Using cognitive-behavioural skills, we can restructure the way you view your procrastination habits and begin to work towards more adaptive coping.

Phillips, L. (2019). Procrastination: An emotional struggle: Mental health professionals are increasingly beginning to recognize and treat chronic procrastination as something much deeper than a time-management or lifestyle issue. Counseling Today, 62(5), 36–41.